Although there are many ways to screen for colorectal cancer, Colonoscopy is undoubtedly the gold standard.  However, it has its drawbacks insofar as it is expensive and associated with small, but real risks of perforation, bleeding, and the sedation. About 15 years ago a new technique for imaging the colon was developed, called virtual colonoscopy or CT colonography. It involves insufflating air into the colon via the anus and then carrying out a special CT scan to identify mucosal abnormalities. It still requires a full bowel prep, in order to clearly image the bowel wall. But CT colonography has the advantages of being less uncomfortable, not requiring sedation and has a lower risk of complications. It also allows for fairly sophisticated 3D reconstruction images of the colon. See these images below.

The key question, however, was whether it was comparable to traditional colonoscopy when it came to screening the colon. Specifically, how good it was at detecting polyps in the colon. In this connection, a two studies were carried out to assess this. They were published in 2003-04 and are shown below

These two studies were designed to investigate whether CT Colonography was comparable to Colonoscopy (henceforth referred to as Optical Colonoscopy).  Assessing whether CT colonography or Optical Colonoscopy is more accurate is actually quite complex to measure, because there is no way to verify missed pathology except by the other method. For example, if a polyp is seen on CT colonography but not on optical colonoscopy, how do we know whether it was missed on the optical colonoscopy or was simply a false finding on the CT colonography. Both papers used a technique call “segmental Blinding” to address this. It isn’t perfect, but it is a reasonable way to address this problem. 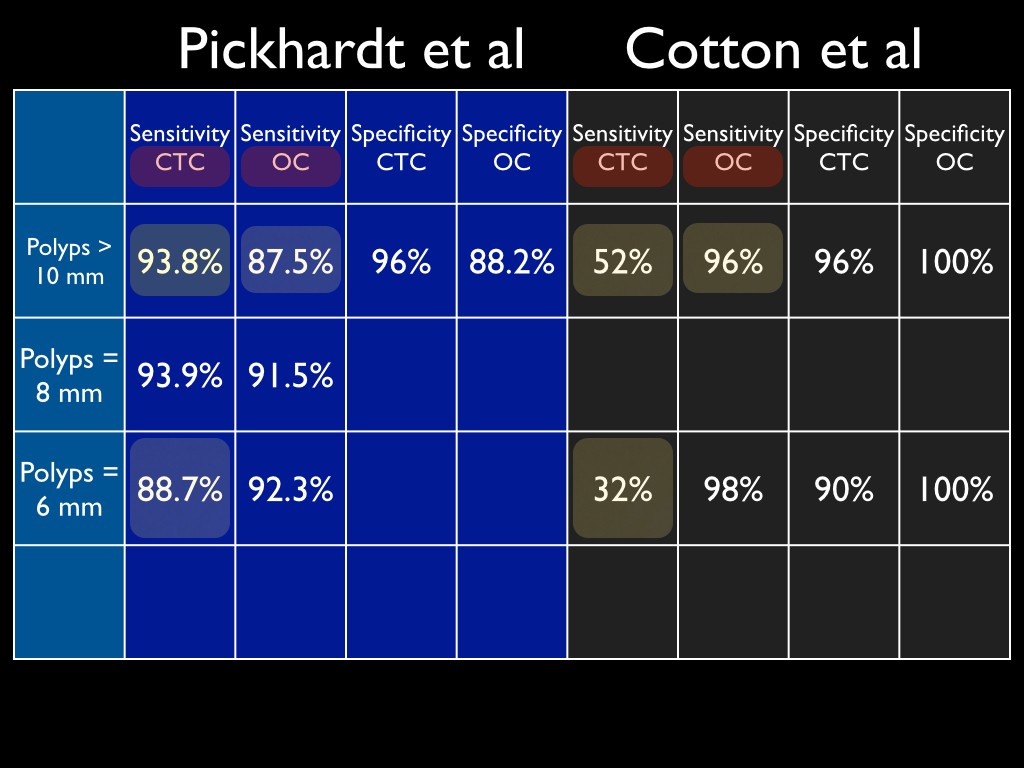 The results and conclusions are remarkably divergent.  Two well-executed studies arriving at  profoundly different results. Within the EBM paradigm, there are many ways to explain this variation in results. different quality CT scanners, variable experience of the radiologists and colonoscopists, different patient populations etc etc etc. But I suspect that most people would find it quite illuminating to find out that Pickhardt, (who finds CT colonography superior) is a radiologist and the author of a major text book on CT colonography, while Cotton ( who finds optical colonoscopy vastly superior) is a gastroenterologist and the author of a major textbook in Gastrointestinal endoscopy. 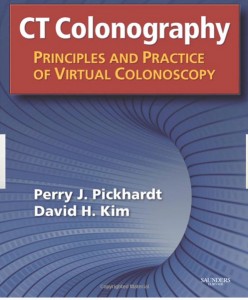 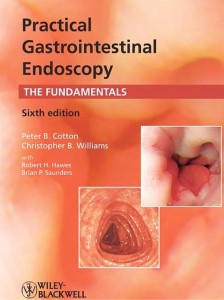 This is by no means to suggest that either researcher has done anything wrong, but merely to point out that I suspect most people regarding these papers would just find this explanation for the divergent results more illuminating than a whole bunch of detailed analysis of the methodologies and techniques of these papers.

CT colonography (sometimes called  “Virtual Colonoscopy”) has been touted as possible alternative to routine ‘optical’ colonoscopy for colorectal cancer screening.[1] Compared to optical colonoscopy, it is low risk, doesn’t require sedation, and does not involve mechanical instrumentation of the colon. There is moderate radiation exposure associated with the CT, but its significance is probably quite low.